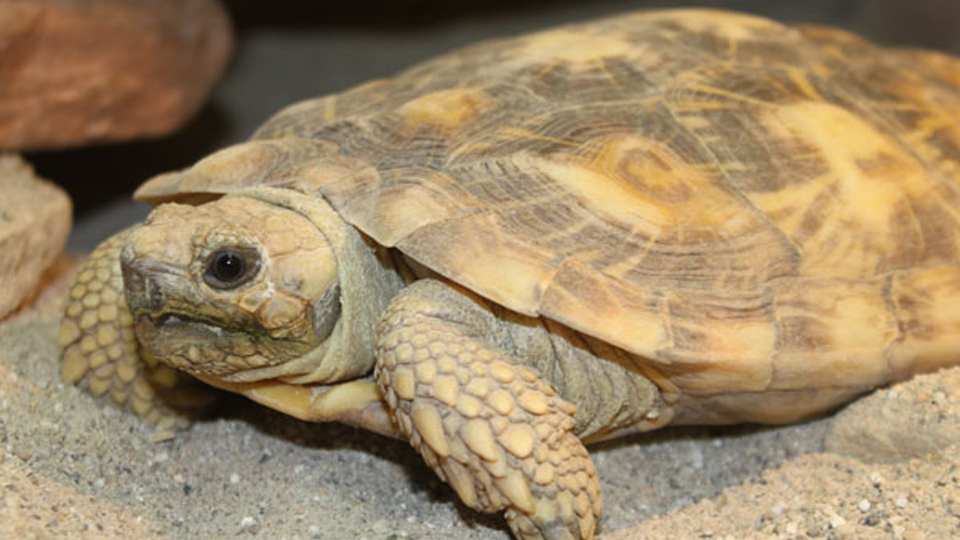 Range: This tortoise is found throughout Kenya and Tanzania.

Habitat: Inhabits thorn scrub and savannas with rocky outcrops (kopjes) where the tortoise can hide.

Characteristics: It is a small, flat tortoise with a flexible shell. The shell has openings between the bony plates, making it much lighter and not as rigid as in other tortoises, and has a flexible bridge (connecting the plastron and carapace) to allow it to be flattened slightly as the tortoise seeks shelter in rock crevices. Individuals are brown, with radiating yellow markings on the shell. The lighter, flexible shell does not provide as much protection as a typical tortoise shell, so they spend much of their time among rocks and in crevices for protection.

Behavior:
The pancake tortoise spends much of its time among the rocks, where it is provided shelter. It is mainly active in the morning, emerging to bask and to feed. It generally only emerges from shelter for about an hour at a time, and is quite mobile and active during that time. When threatened, it will run to a crevice and use its legs to wedge itself as deeply inside as it can, remaining until the danger is gone.

Reproduction:
Breeding occurs in January and February in the wild, though it may occur year-round in captivity. Egg-laying usually commences in the summer, with females laying 1-2 eggs at a time in loose, sandy soil. A female may produce more eggs every 6 weeks over the season. Eggs are about 2 inches long and about 1 inch wide, and hatch after four to six months.

Interesting Facts:
The pancake tortoise is thought to be the fastest tortoise and the best climber, due to the lightness of its shell. Rather than ducking into its shell for protection, when threatened it will run for shelter in the rocks. The shell of the pancake tortoise is very flat, which makes it easier for the tortoise to right itself when overturned. They overturn frequently, due to their habit of climbing on and over rocks. These tortoises are surprisingly social, and get along well in a group as long as there is enough food for all. As many as ten tortoises have been found sharing the same crevice.

Conservation:
The wild population of pancake tortoises is declining due to collection for the pet trade. It is currently illegal to import wild-caught tortoises, although captive-bred tortoises are available. Since they are dependent on rocky outcrops for shelter, populations of tortoises can become isolated easily, and are vulnerable to being harvested below sustainable numbers. Their reproductive rate is low. Populations that have been harvested for the pet trade appear to be made up mostly of juveniles (which are harder to find and collect), whereas unharvested populations have a higher percentage of adult individuals and higher population density.