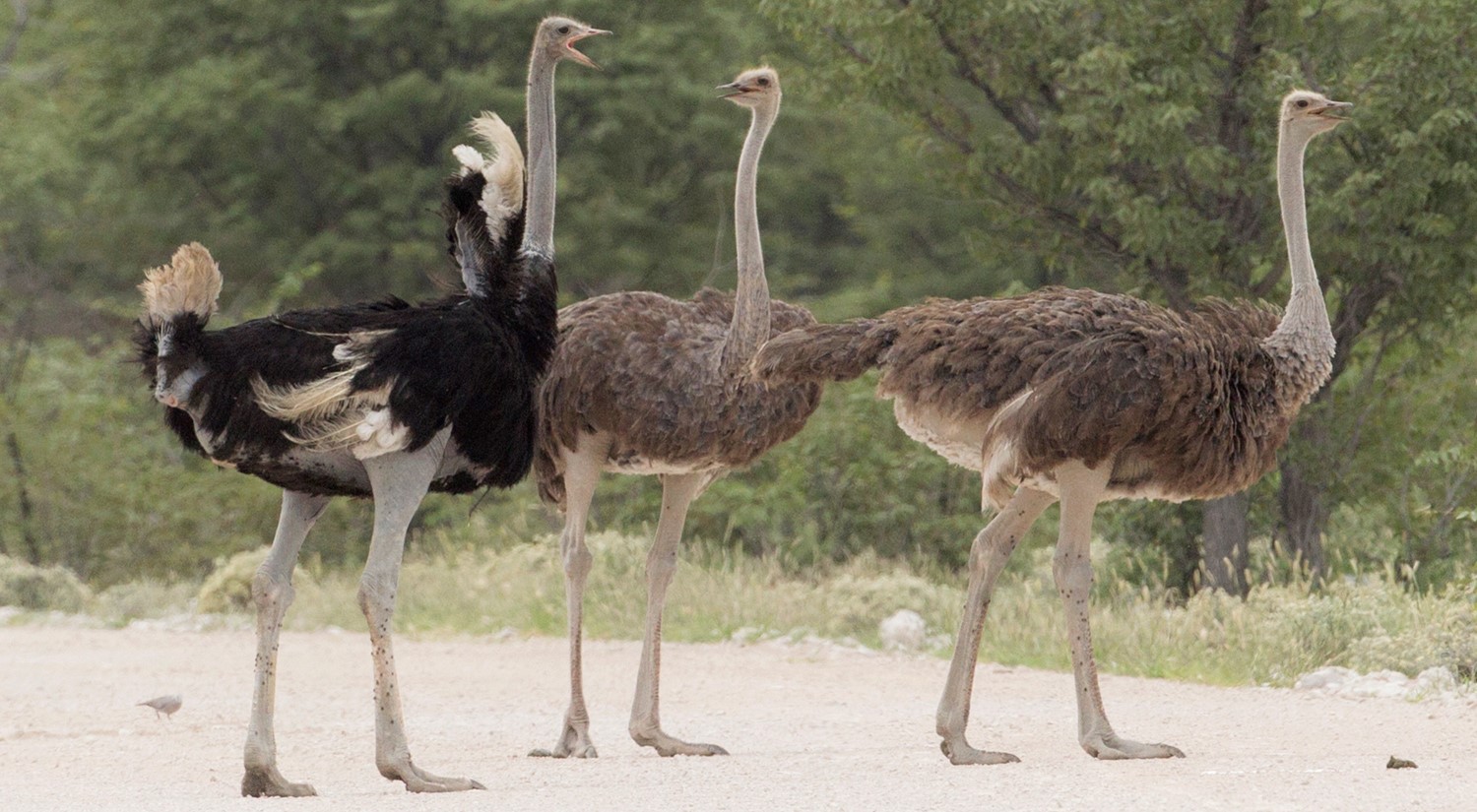 Struthio camelus, also known as the Common Ostrich, once roamed Southwestern Asia, the Arabian Peninsula, and Africa. Today, they are found only in drier and sandy regions of sub-Saharan Africa. Four subspecies are recognized, mostly different in the color of the neck and legs and the amount of feathers found on the head. They are the largest living birds, standing between six and nine feet tall. The distinctive ostrich also has the largest eyes of any land animal. Uniquely, they are the only bird to have two toes, one of which has a 4-inch claw. Their average lifespan in the wild is forty years, while in captivity they may live up to fifty. Ostriches live in herds of 5 to 50, occupying regions between 2 and 15 square kilometers during breeding season (around 5 months). Smaller groups of 2 to 5 are formed outside of the breeding season. Males have been known to make a call similar to the roar of a lion. Where food is scarce, breeding pairs are mostly monogamous, but elsewhere they normally form a harem with a single dominant male. Breeding begins around age 3 or 4 years old. They can be found among grazing animals like zebras or antelope.

Ostriches are particularly fond of water and will take frequent baths when given the chance. A common myth about ostriches is that they bury their heads in the ground. This is untrue, but when trying to be inconspicuous, they do lay on the ground with their necks outstretched. Their main defense is the use of their powerful legs, which can kill a human or even a lion. Although they are a flightless bird, these legs allow them to run up to speeds of 40 mph. Ostriches are omnivorous, eating mostly plant matter, but they will feed on animal remains left by other carnivores. They are selective feeders, but sometimes will also eat locusts. They can survive without water for long periods of time because they get most of what they need through the plants that they eat.

Humans have hunted ostriches for not only their feathers and eggs (which are the largest in the world), but also their hide, which makes a fine leather. Native African tribes will use the shells of ostrich eggs for drinking and holding bath water. They became nearly extinct in the eighteenth century for this reason, until sustainable farming of domesticated ostriches began. Since then, the need for feathers has lessened and their biggest threat currently is due to habitat loss.